Dislikes: Being weaker then others, Practical Jokes, Disco

Fears: "Giant Wet Chicken" (Originally termed as being the most horrible fear of all)

Bio: A rebellious teenage girl with a lot of strength. She is often seen as the rule enforcer amongst the students by "Hanging them on the coatrack by their underwear" if they step out of line and bully others. Despite her cold exterior, she is shown to care about her friends a great deal and is always there to help them in any situation. She originally ran away from her family but still keeps in contact with her father.

She ran away from her parents (Mice and Kids,The Outcast)

Zero loves Vin but is reluctant to show it (Lovestruck Stinkbomb, Ghost of Pinkerton, Back to the Past)

She has martial art skills (The Outcast)

She is afraid of a giant Chicken (Pinkertomb)

She hates Disco (The New Student)

Her room and various decorations shown are based of the asian culture (Burt the Brute, Patient Zero, The Outcast)

Zero has never been called by her actual name making her the only character on the show to never have their real name used or hinted.

Despite her hate for disco music, she seemed very tolerant of it when Trixies parents came to visit (Mice and Kids) 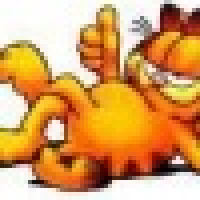